Over the last half decade, Shabaka Hutchings has established himself as a central figure in the London jazz scene, which is enjoying its greatest creative renaissance since the breakthroughs of Joe Harriott and Evan Parker in the 1960s. Hutchings has a restlessly creative and refreshingly open-minded spirit, playing in a variety of groups—most notably, Sons of Kemet, The Comet Is Coming, and Shabaka & the Ancestors—and embracing influences from the sounds of London’s diverse club culture, including house, grime, jungle, and dub. “The common theme in my career as a jazz musician has been wondering if what I’m doing is the thing that I should be doing,” says Hutchings, who studied classical clarinet at college at London’s prestigious Guildhall School of Music & Drama. “Me learning about jazz, how to play and interpret, was always a case of just trial and error. I think where I’ve come to recently is I’ve stopped trying to think ‘Is what I’m doing valid? or ‘Is what I’m doing part of the jazz tradition?’ and just see myself as a musician.”

Now 33, Hutchings first began garnering attention as a member of Melt Yourself Down, the “Nubian party punk” band led by fellow saxophonist Pete Wareham. Sons of Kemet (“Kemet” being the pronunciation of the ancient name of Egypt) marked his first group as a bandleader, and 2013’s Burn and 2015’s Lest We Forget What We Came Here To Do, both released by the UK label Naim Jazz, received significant acclaim, including a nod from influential DJ Gillles Peterson. Sons of Kemet’s new album, Your Queen Is a Reptile, their first record for Impulse!, is the band’s most fully realized creation yet, powered by Hutchings’ blazing, incendiary saxophone, Theon Cross’ tuba blasts, which sound like funky bass lines, and the high-octane interplay between multiple drummers (a revolving cast that includes Tom Skinner, Seb Rochford, and Eddie Hick).

Born in London, Hutchings moved to Birmingham at age two, then relocated to Barbados at six, remaining there til he was 16 (after which he returned to England). He began to play clarinet in the school band, and the calypso and soca music of Barbados’ Carnival not only provided Hutching’s first musical memories but informs Sons of Kemet’s kinetic intensity. “Everyone comes out on the street and it’s a massive party,” says Hutchings of Carnival, “and in some ways that’s the core feeling that we’re trying to get in Sons of Kemet. As someone from the Caribbean diaspora imagining that feeling, how I remember that feeling as a youngster, I want everyone in the room being so connected to that jubilant feeling of really just enjoying the celebration of music. That’s what I’m trying to get with the performances, the situation where every single person in that room can feel this energy that brings us all together. And once we are together, for me that’s when the transcendence can happen.”

In his teens he was obsessed with reggae and hip-hop, especially Tupac, Bone Thugs-n-Harmony, and E-40 (“he’s the Eric Dolphy of hip-hop,” Hutchings says of the West Coast rapper, “where he’s going is just completely out there”), and still practices by playing his saxophone along to rap albums like the Notorious B.I.G.’s Ready To Die. “What I’m trying to do a lot of times on the saxophone is provide that role of the MC, not from a narrative perspective but from the perspective of someone trying to provide this rhythmic relentlessness,” says Hutchings. “When I step on the stage in Sons of Kemet I’m not trying to be Sonny Rollins or John Coltrane, I’m trying to be someone like Capleton or Anthony B or Sizzla, in terms of just the energy that I’m coming up with: That’s who I want to be. My core vocabulary is jazz, but I’m not trying to have the energy of someone in a suit standing stationary in front of a microphone giving a nice round sound, I’m trying to just spit out fire.”

Hutchings distinguishes one group from another less by the music they make than by the different combination of personalities. While he describes The Comet Is Coming as having an “anarchist approach” to music (“In that we don’t talk about what anyone else is supposed to do,” he says, “we all just play what we think it should be”), with Sons of Kemet he’s the composer of all the tunes. “In some ways, it is my group,” he says of Sons of Kemet. “I can say, ‘No, stop here, this should be a break.’ But even within that, I trust the musicians. If they’ve got a better idea about what should happen then, we’ll try it out and see how it goes.”

Sons of Kemet boasts a somewhat unorthodox lineup—saxophone, tuba, and two drummers—but for Hutchings it’s a natural arrangement. “I’ve never seen it as unconventional,” he says of the group’s instrumentation. “It’s just been that I wanted to play with those two drummers. In some ways it was split between a desire to play with the two individuals and also a desire to take away the function of the drums as being the thing that provides the rhythm. When you’ve got two drummers they converse with each other. It takes the onus off any one particular drummer to provide the beat, because there’s going to be a forward momentum just from them expressing together.” 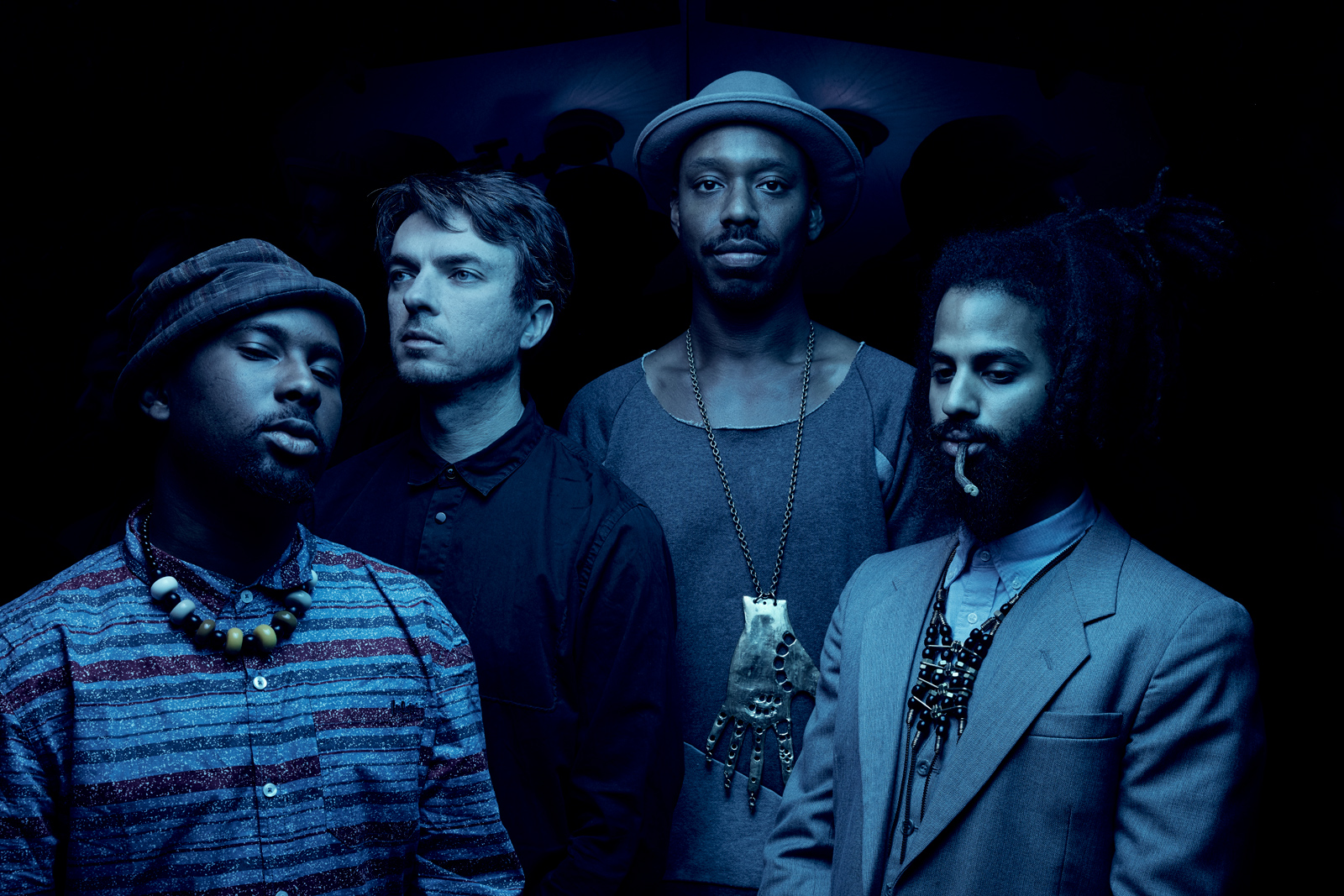 This is the second Sons of Kemet album to feature the band’s new tuba player, Theon Cross, who replaced original tubist Oren Marshall. “It feels like Theon has got the same musical backbone as me,” says Hutchings. “He’s also from the Caribbean, and it feels like we’ve grown up listening to the same core repertoire of Caribbean music and jazz and hip-hop and all these things. And we all treat that musical history with the same irreverence, in that that we love the music, we appreciate it, but we’re not trying to play a genre, we’re not trying to express it in an obvious way.”

The album’s title, Your Queen Is a Reptile, is less a shout-out to herpetology (or to controversial British author David Icke’s conspiracy theories), than a call-out of the entire concept of hereditary monarchy. “One of the myths that humans believe is that some people are born better than others,” says Hutchings. “So for me to say Your Queen Is a Reptile is to say I have the agency to actually put forward a new myth that may not make any literal sense but makes as much sense as her being better than me because of who her father was. And maybe it forces people to actually think about, ‘Who is my Queen?’ ‘Who do I consider my Queen?’ ‘Do I have a Queen?’”

Through the song titles of the album’s nine tracks, Hutchings posits a more personal notion of potential royalty. The record’s opening track, “My Queen Is Ada Eastman,” pays tribute to Hutchings’ great-grandmother. One of his earliest memories is of Eastman standing on the roof of her house in Barbados, fixing a leak with a hammer. At the time, she must have been in her mid-80s; she lived to age 103, and by the time she died, she owned three houses despite not being able to read or write. She had worked until she was 60, then moved to America and worked as a domestic laborer for another 20 years, saving money and sending it back to Barbados to provide for her family. “I would say that’s my queen,” says Hutchings of Eastman, “that’s the person that inspires me to get up in the morning and try to get better at whatever I’m doing.”

The album’s other “queens” honor an impressive roster of remarkable black women. A few, like Angela Davis and Harriet Tubman, are already well-known personas. Of the frenetic pace of “My Queen Is Harriet Tubman,” Hutchings explains, “As I was listening to the tune, I just had the image of someone escaping slavery, escaping being in bondage. The feeling of having someone go ‘If you go down that road, if you meet me at this location, you can be free.’ How does that person run? What’s the energy that person puts into actually getting from point A to Point B? That person is going to really put all their energy into getting to that place at that time.”

Some “queens” are historical figures deserving of more widespread recognition, like Anna Julia Cooper, a scholar, author, and educator born into enslavement in the 1850s but who became one of the first African-American women to earn a doctoral degree, often referred to as “the mother of black feminism” (“In the age that she lived it was unusual for black men to have that much education, let alone black women,” says Hutchings, “so for a woman to go, ‘No actually, intellectually I have something to offer, I’m going to progress,’ that’s inspirational to say the least”); Nanny of the Maroons, a leader of Jamaica’s 18th century community of escaped slaves who repeatedly fought off British attempts to conquer their free settlement during the 1730s (“To know there was a situation where a woman was at the forefront of actually keeping a community from the outside of the occupation of the British, to me that’s mind-blowing in the Caribbean context”); and Yaa Asantewaa, queen mother of the Ashanti Empire who led her people in a war against British colonialism in 1900 in what is now modern-day Ghana (“She basically said that if the men don’t want to go and resist British occupation, the women will do it”).

The record’s more contemporary “queens” include Mamie Phipps Clark, an American social psychologist whose studies of the damaging effects of racial segregation on black children played a key role in the Supreme Court’s landmark 1951 Brown v. Board of Education decision; Albertina Sisulu, a South African anti-apartheid activist who helped lead the movement while her husband Walter Sisulu was imprisoned for 25 years on Robben Island with Nelson Mandela; and Doreen Lawrence, the mother of Stephen Lawrence—a black teenager murdered by a mob of white men in a 1993 racially motivated London attack that police tried to dismiss—whose 20 year campaign to bring her son’s killers to justice led to both a 2012 prosecution and a wholesale reform of the entire British criminal justice system. “My Queen Is Doreen Lawrence” features lyrics by poet Joshua Idehen about the London riots of August 2011; Idehen also contributes a rap about the immigrant experience to “My Queen Is Ada Eastman,” while jungle producer Congo Natty toasts on the dub-flavored “My Queen Is Mamie Phipps Clark.”

While jazz can tend to be obsessed with its past, Hutchings’ music is distinctly and defiantly forward- (and outward-)looking, which he feels owes a great deal to its makers’ Britishness. “I guess that’s an aspect of being a part of a musical diaspora,” says Hutchings. “Not being from the place that jazz is born from means that I don’t feel any ultimate reverence to it. It’s just about finding ways of reinterpreting how we’re thinking about the music, re-envisioning it, just like completely decontextualizing it and saying it’s up for grabs. For me, the history of jazz is a perspective. Obviously some perspectives may be worth more than others because the perspective of someone who came up in the land where it was formulated may have more weight than someone who just views it from outside, but it’s still just a perspective. Life is just a series of perspectives, and if we can sometimes trust the perspectives of others, to me then that’s where the magic happens.”